To recap, each operator is responsible for maintaining 3 secure processes:

This document outlines the Ethereum signatures, all contract calls on Peggy.sol accept an array of signatures provided by a validator set stored in the contract.

The Delegate Ethereum address then represents that validator on the Ethereum blockchain and will be added as a signing member of the multisig with a weighted voting power as close as possible to the Injective Chain voting power.

The signing flow works as follows.

Relaying rewards cover all messages that need to be submitted to Ethereum from Injective. This includes Validator set updates and transaction batches. Keep in mind that these messages cost a variable amount of money based on wildly changing Ethereum gas prices and it's not unreasonable for a single batch to cost over a million gas.

A major design decision for our relayer rewards was to always issue them on the Ethereum chain. This has downsides, namely some strange behavior in the case of validator set update rewards.

But the upsides are undeniable, because the Ethereum messages pay msg.sender any existing bot in the Ethereum ecosystem will pick them up and try to submit them. This makes the relaying market much more competitive and less prone to cabal like behavior.

Any asset originating from Ethereum which implements the ERC-20 standard can be transferred from Ethereum to Injective by calling the sendToCosmos function on the Peggy.sol contract which transfers tokens from the sender's balance to the Peggy contract.

The validators all run their oracle processes which submit MsgDepositClaim messages describing the deposit they have observed. Once more than 66% of all voting power has submitted a claim for this specific deposit representative tokens are minted and issued to the Injective Chain address that the sender requested.

The validators off-chain relayer process observe this event and submit MsgDepositClaim messages describing the deposit. Once more than 66% of all voting power has submitted a claim for this specific deposit, representative tokens are minted and issued to the Injective Chain address that the depositor specified. These representative tokens have a denomination prefix of peggy concatenated with the ERC-20 token hex address, e.g. peggy0xdac17f958d2ee523a2206206994597c13d831ec7.

An asset native to a Cosmos SDK chain (e.g. ATOM) first must be represented on Ethereum before it's possible to bridge it. To do so, the Peggy contract allows anyone to create a new ERC-20 token representing a Cosmos asset by calling the deployERC20 function.

This endpoint is not permissioned, so it is up to the validators and the users of the Peggy module to declare any given ERC-20 token as the representation of a given asset.

When a user on Ethereum calls deployERC20 they pass arguments describing the desired asset. Peggy.sol uses an ERC-20 factory to deploy the actual ERC-20 contract and assigns ownership of the entire balance of the new token to the Peggy contract itself before emitting an ERC20DeployedEvent.

The peggo orchestrators observe this event and decide if a Cosmos asset has been accurately represented (correct decimals, correct name, no pre-existing representation). If this is the case, the ERC-20 contract address is adopted and stored as the definitive representation of that Cosmos asset on Ethereum.

This document describes the end to end lifecycle of the Peggy bridge.

The ProxyAdmin is a central admin for the Peggy proxy, which simplifies management. It controls upgradability and ownership transfers. The ProxyAdmin contract itself has a built-in expiration time which, once expired, prevents the Peggy implementation contract from being upgraded in the future.

Then the following peggy genesis params should be updated:

This completes the bootstrap of the Peggy bridge and the chain can be started. 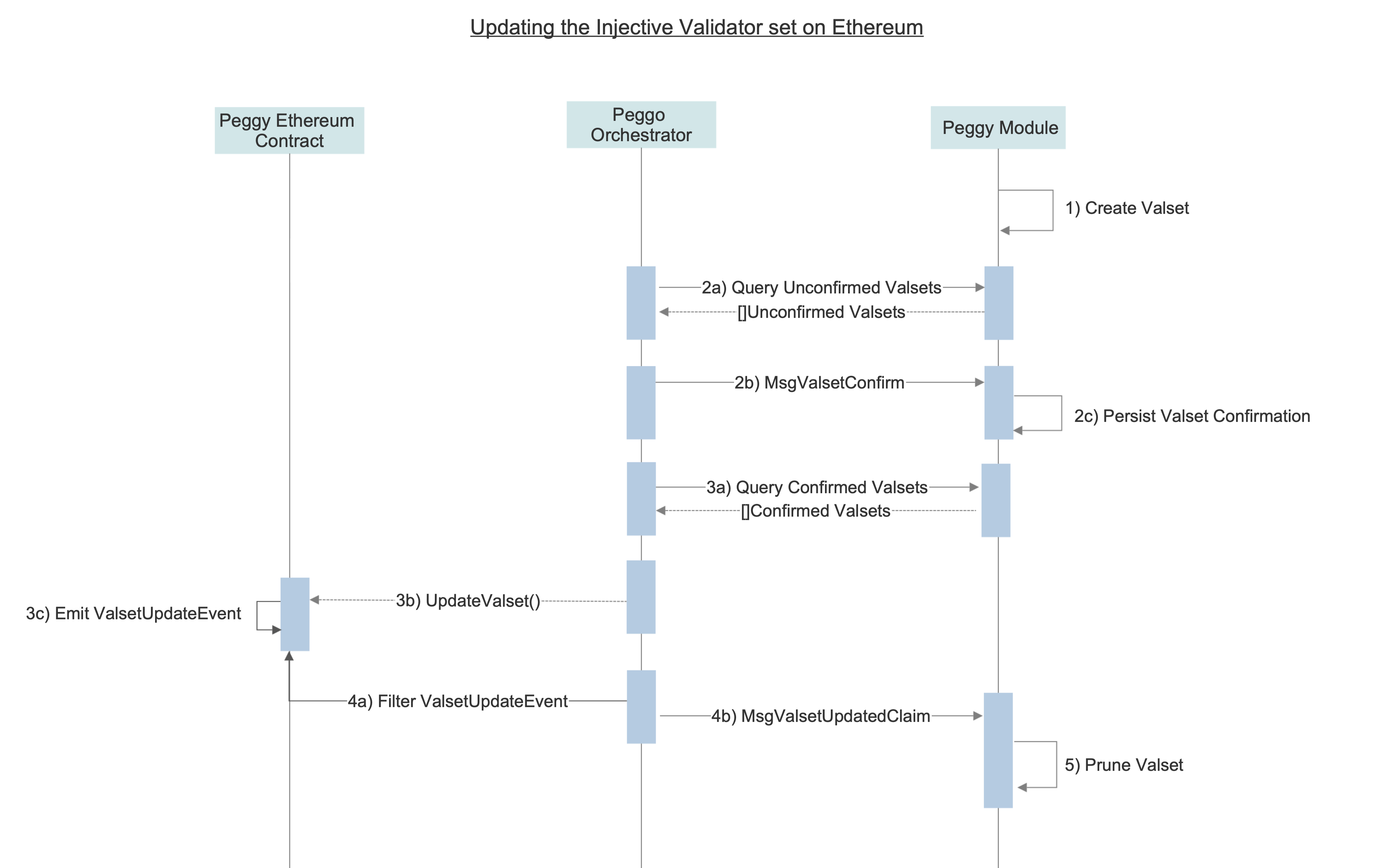 ERC-20 tokens are transferred from Ethereum to Injective through the following mechanism:

# Withdrawing tokens from Injective to Ethereum 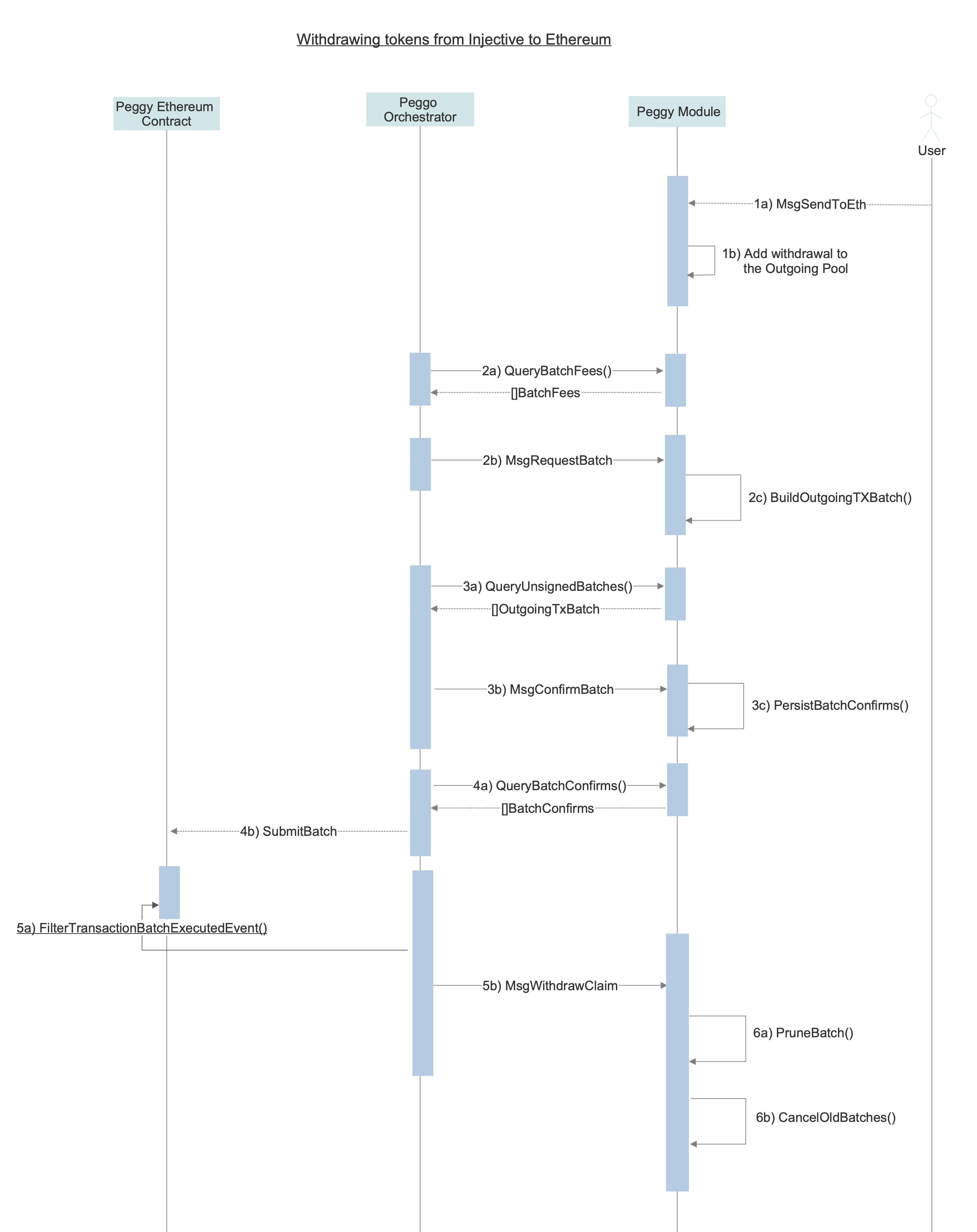 Note while that batching reduces individual withdrawal costs dramatically, this comes at the cost of latency and implementation complexity. If a user wishes to withdraw quickly they will have to pay a much higher fee. However this fee will be about the same as the fee every withdrawal from the bridge would require in a non-batching system.

Found an Issue?
Help us improve this page by suggesting edits on GitHub.
Previous
Definitions
Next
State